Report by Joe Ó Muircheartaigh for the Irish Examiner newspaper

Tulla’s Harty Cup dream became a reality on the Ennis Road this Saturday afternoon as they claimed the prized scalp of five times champions Ardscoil Rís from Limerick to win the Munster Colleges A hurling title for the first time.

Before this school year the East Clare outift had never won a game in Harty Cup competition, but it has all changed over a few fairytale months as an epic run of four victories secured them this famous title win.

History was theirs thanks to a brilliant display over the hour, with a battling performance in the first half when playing into the teeth of a strong wind ultimately teeing them up for this remarkable triumph.

It was triumph fashioned out of grit and determination throughout, but no little class too, as a St Joseph’s side followed in the footsteps of storied St Flannan’s and Ennis CBS by bringing the province’s blue-ribbon cack to Clare.

It was a victory that was thoroughly deserved with the opening ten minutes of the second half marking Tulla out as a team apart — in that time they hit 0-6 without reply to turn a two-point deficit into a 0-14 to 0-10 lead and, in truth, they never looked back.

This powerplay came after a near-perfect first half in which the new champions only hit a solitary wide and really took the game to the favourites despite the elements being against them.

With Seanie Withycombe continuing his freescoring ways by helping himself to 0-6 over the half-hour, it looked as if the underdogs would lead at the break when they edged 0-8 to 0-6 by the 26th minute. However, Ardscoil rallied with Niall O’Farrell matching Withycombe’s tally with three late points to give his side the slenderest of advantages at 0-9 to 0-8.

All that was left was for Tulla to keep up their workrate and accuracy, qualities, when allied to the wind advantage, put them in pole position to reach out and grab this large slice of hurling history.

Withycombe had 1-45 to his name coming into this decider and yet another double figures haul of 0-10 was crucial to the cause, particularly as Tulla were forced to withstand a determined fightback by Ardscoil in the closing 20 minutes as they strove valiantly to keep up the school’s 100 per cent record in Harty finals.

Points by Niall O’Farrell and Rian O’Bryrne got Ard Scoil going again by the three-quarter stage. Then a further brace via Shane O’Brien and Dylan Lynch in response to another Withycombe free made it a one-point game entering the last ten minutes.

However, Tulla were not to be denied and held firm thanks to defiance throughout the field, but in particular by defenders Adam Hogan, Fionn Ryan and Oisin Clune as well as from midfielder and captain Ronan O’Connor.

Then vital scores late scores from Withycombe and Cleary steered the home to history.

Interview with Man of the Match and St. Joseph’s Tulla Captain Ronan O’Connor

Tickets must be purchased in advance.

The game will be streamed live by Munster GAA.

Live from the Gaelic Grounds on Saturday from 1pm.

Pick up a copy of the 36 page Souvenir Match Programme for 3 euro on Saturday. 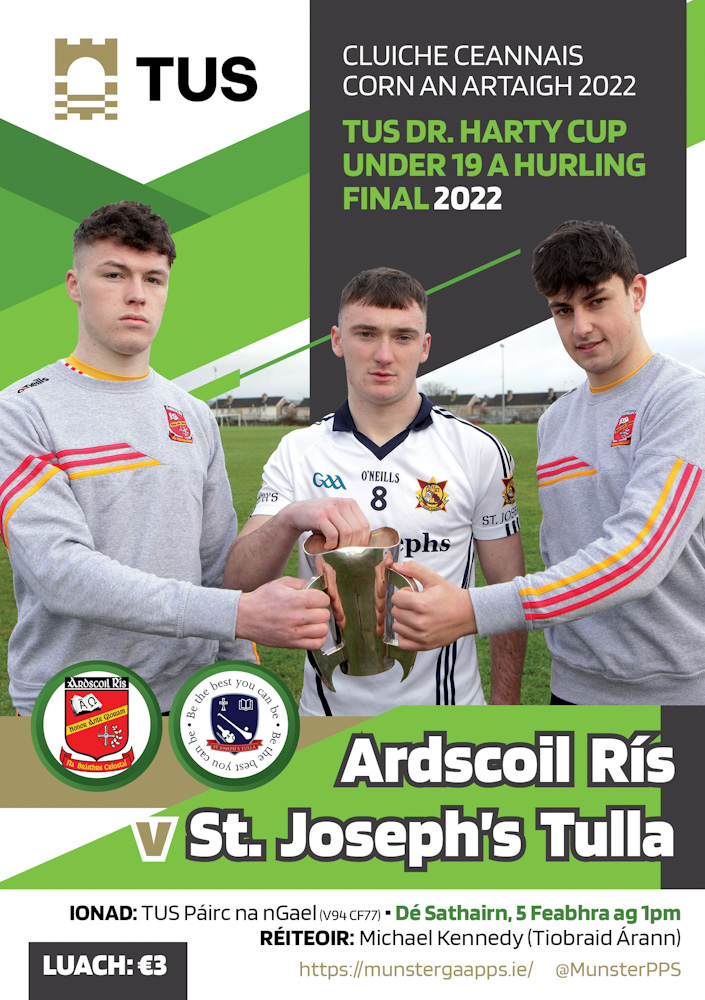